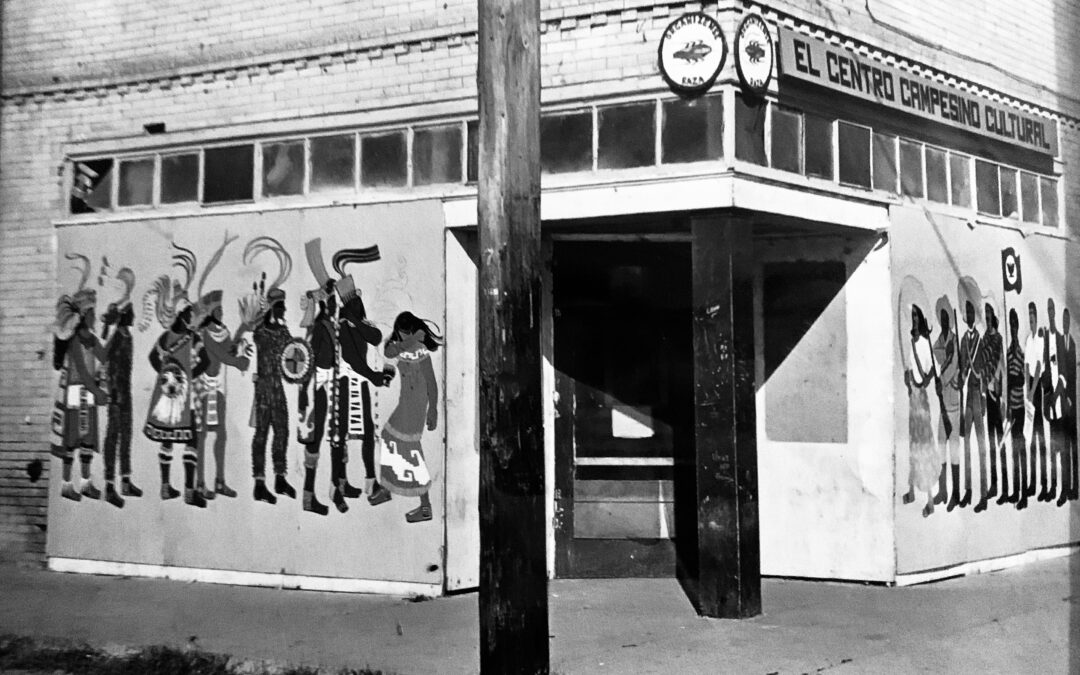 Teatro Campesino wasn’t around to perform in front of a newly repainted mural that was used as a backdrop for one of its performances in the 1960s.

But the troupe that rose up during the farmworker movement was alive on May 14 when about 100 people showed up in the empty lot between the wall and another building in this community of 1,261 located about 5½ miles southeast of Sanger.

It helped that Antonio Bernal – who painted the original mural showing major figures like Pancho Villa, Emiliano Zapata and César E. Chávez, among others – was present for the ceremony.

Bernal, who quit his job as a social worker with the welfare department because its rules on eligibility were too strict, was driving around the area when he noticed the teatro.

“I see the performance, Luis Valdez and Danny Valdez and Lupe and all these people are out there running around,” said Bernal. “I think, My God, this is really my mero mole (real thing).”

Bernal, who is now retired and living in Fresno, quit his county job “because, you know, when you’re young, you can do things like that.”

”I just felt this is really me because I was raised in México. I could just feel that Mexican thing … lo rasquacho que tiene cierta gente (the underdog lifestyle certain people have.”

He ended up joining Teatro Campesino, and recalls performing in France with the group and singing ‘Le Internacional’ in Spanish at the Sorbonne “with hundreds and hundreds of people singing in different languages.”

However, the teatro experience didn’t last long for Bernal. The group got back from France, Luis Valdez went to Hollywood and made ‘La Bamba.’

Bernal thought he’d also be involved in movies, “but it was only Luis and Danny.”

“I started running around with a friend of mine who was an actress in Televisión Centro (in México City) and did a lot of television there,” said Bernal. “So my life just scattered.”

The teatro, he said, “was a moment in my life and that was that.”

Bernal was the rock star at the mural ceremony, getting praised by Ernie Palomino, the “Godfather of Chicano Art,’ as well as from Mauro Carrera who brought the mural back to life.

“I remember opening up textbooks when I was 16 and I saw your mural,” Carrera told Bernal. “Thank you for planting the seeds for all of us.”

Carrera had help from Juan Bejar, Steven Camacho, Hana Luna Her, José Bejar, and, Sergio Bejar in finishing the mural mere minutes before the ceremony. In fact, he had to drive to a friend’s house to shower and showed up just in time for the event.

She remembers the farmworker movement at the time because her father was a constable who often was the middle point between the farmers and the farmworkers.

Teatro Campesino was based in Del Rey for several years.

The mural, said Filgas Treviño, is a “gift to the community.”