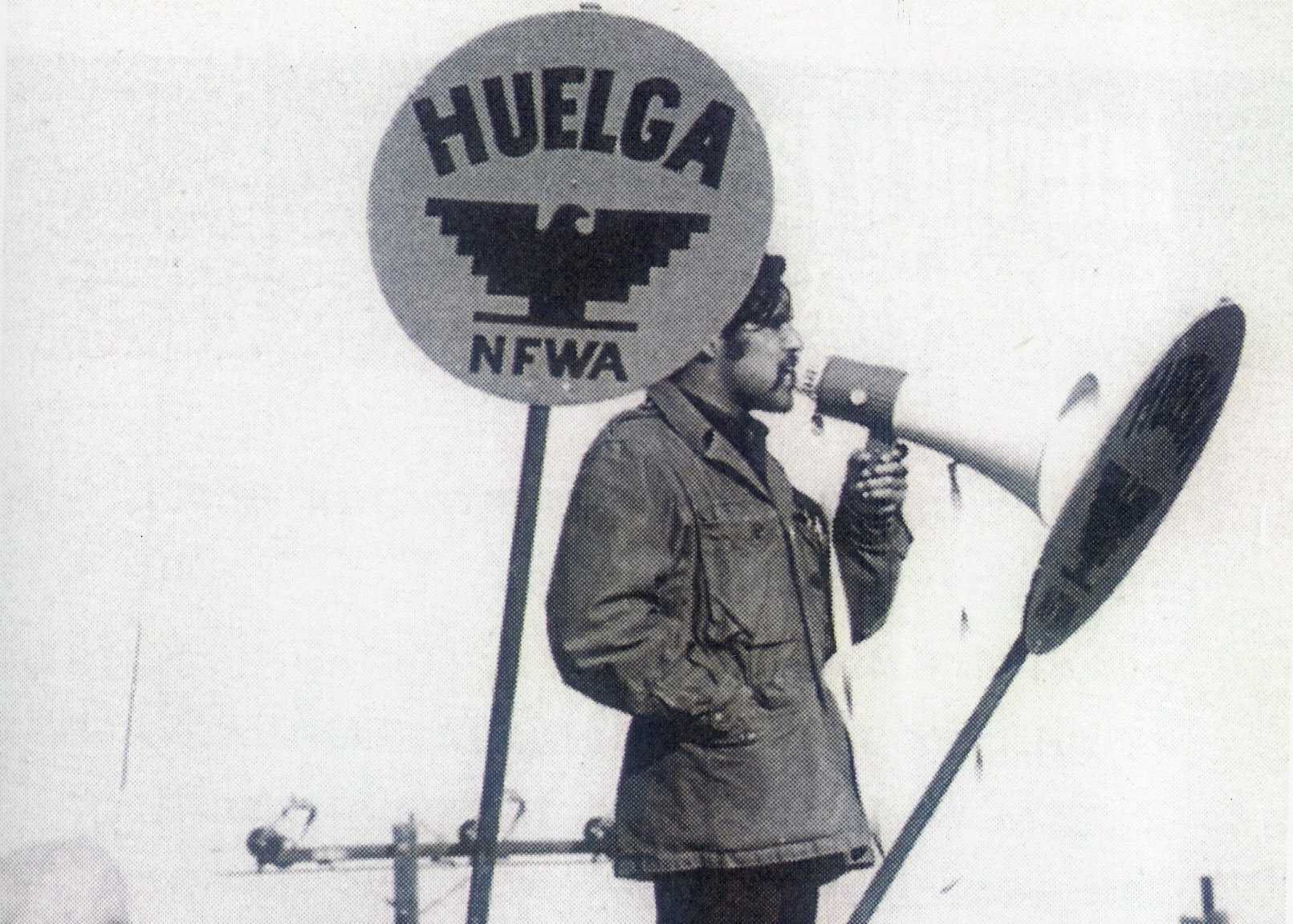 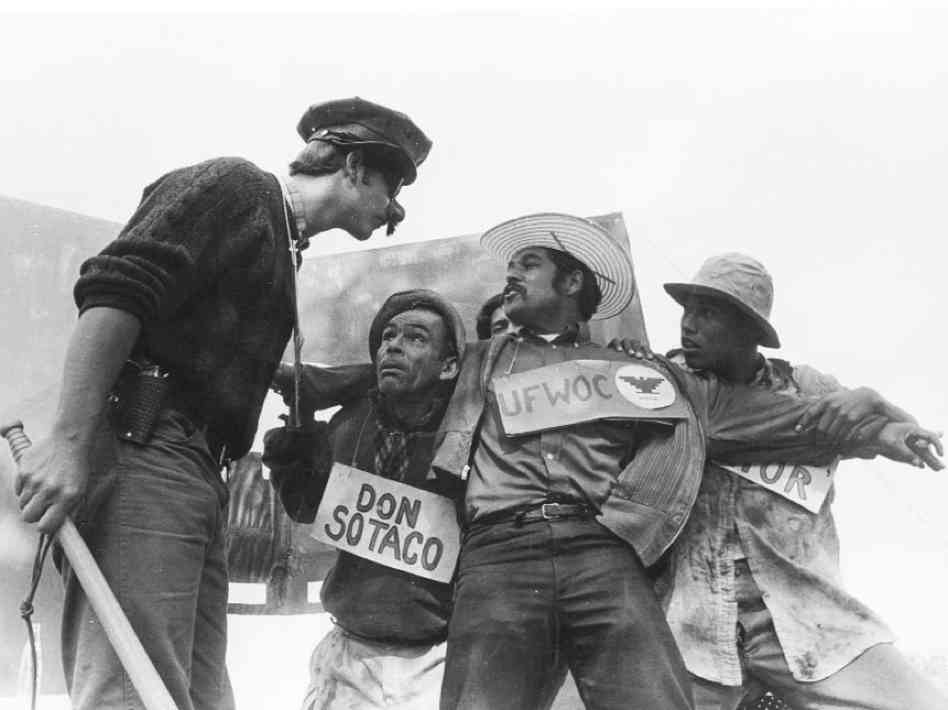 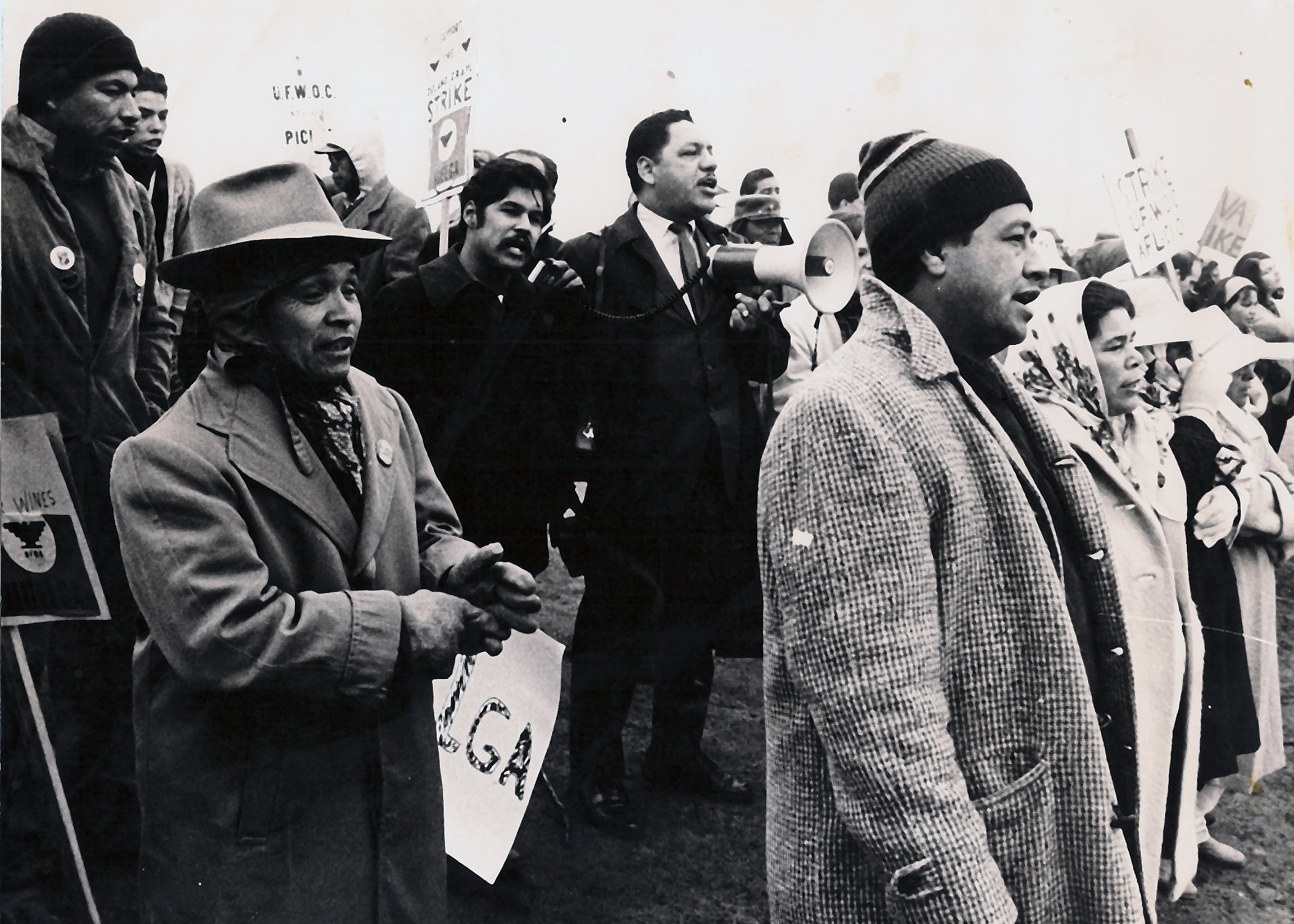 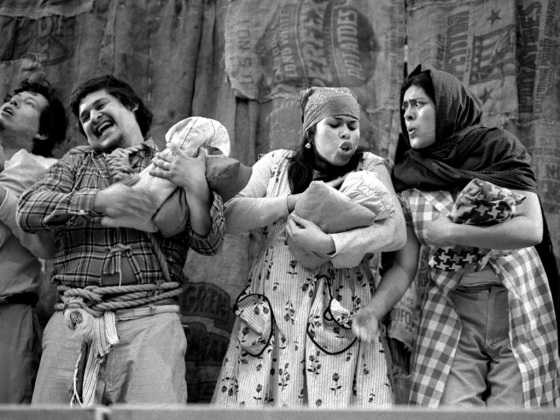 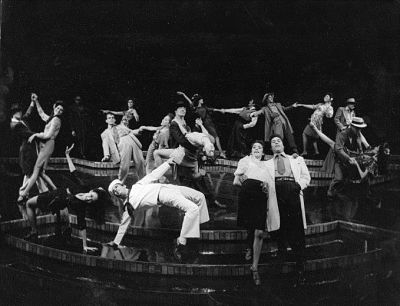 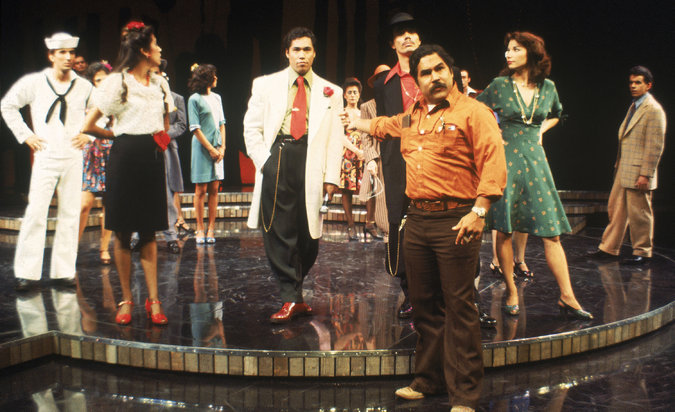 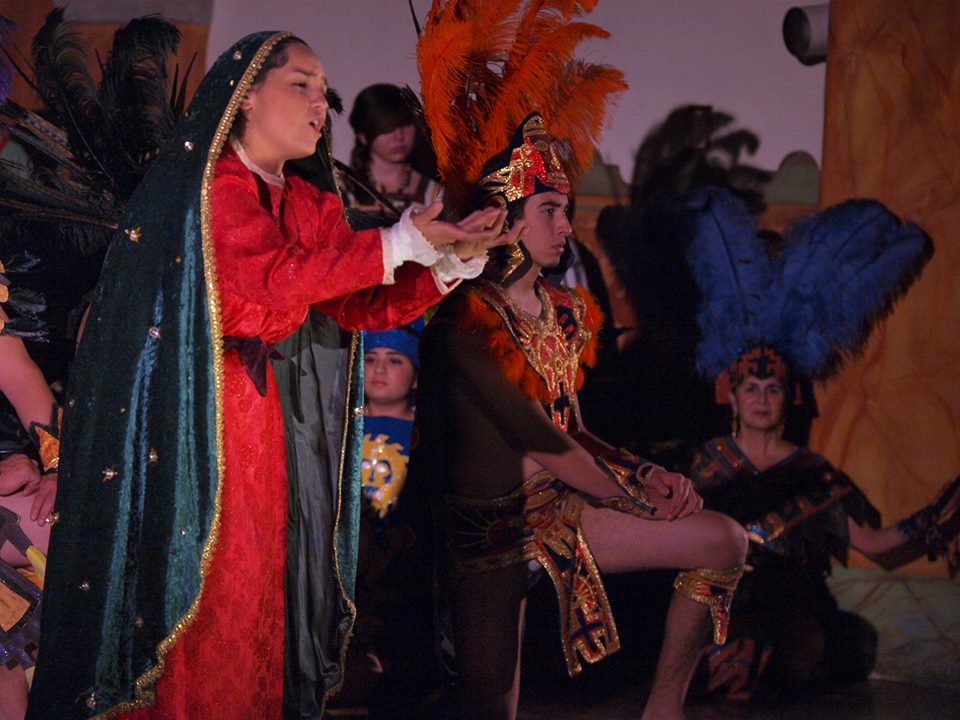 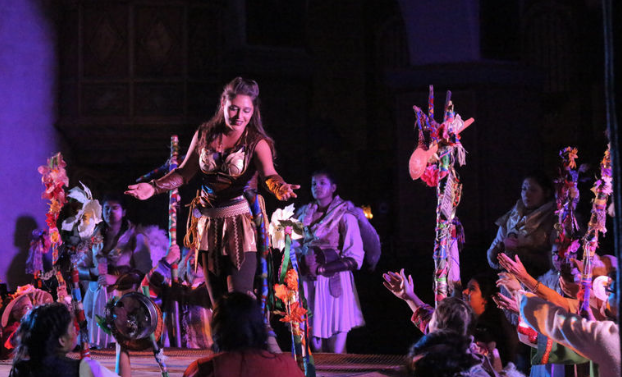 Since its inception, El Teatro Campesino and its founder and artistic director, Luis Valdez, have set the standard for Latino theatrical production in the United States. Founded in 1965 on the Delano Grape Strike picket lines of Cesar Chavez’s United Farmworkers Union, the company created and performed “actos” or short skits on flatbed trucks and in union halls. Taking the “actos” on tour to dramatize the plight and cause of the farmworkers, El Teatro Campesino was honored in 1969 with an Obie Award for “demonstrating the politics of survival” and with the Los Angeles Drama Critics Award in 1969 and 1972.

In 1971, the company moved to San Juan Bautista, a rural town of 1,600 people located on the periphery of the major metropolitan centers of Northern California. In the summer of 1973, legendary British theater director Peter Brook and his Paris-based company, The International Centre of Theater Research, participated in an eight-week experimental workshop with the company in San Juan Bautista culminating in a joint venture performing throughout farmworker communities in the San Joaquin Valley.

In 1976, El Teatro Campesino launched an extended European tour starting at the Popular Comic Theatre Festival in Nancy, France and made its way through eight western European countries to critical and public acclaim. Over the years, the company toured the United States, and Mexico, and made six major tours throughout Europe.

During the 70’s, the company evolved a series of plays termed “The Miracle, Mystery, and Historical Cycle of San Juan Bautista.” During the Holiday season, the miracle play of the four apparitions of Our Lady of Guadalupe called “La Virgen del Tepeyac” and the traditional shepherds play, “La Pastorela,” are still performed in the Old Mission of San Juan Bautista on alternate years.

In 1977, a Rockefeller Foundation Grant enabled El Teatro Campesino Artistic Director Luis Valdez, to create for the Mark Taper Forum “Zoot Suit,” one of the most successful plays ever to originate in Los Angeles, playing to critical and popular acclaim to close to half a million people. Mounted on the New York stage by the Shubert Organization, “Zoot Suit” became the first play by a Latino to be presented on Broadway. The motion picture version for Universal Pictures, directed by Valdez, received the prestigious foreign press association’s Golden Globe Award nomination for “Best Musical Picture.”

In 1981, the Teatro acquired a warehouse and converted it into its new playhouse. The company began experimenting with the relationship between music, dance, and theater. The subsequent musical theatre production of “Corridos” (based on Mexican folk ballads) played to sold-out houses in San Juan Bautista and eventually moved to the Marines Memorial Theater in San Francisco, where it was awarded eleven Bay Area Theater Critics Awards including Best Musical.

In 1986, El Teatro Campesino joined forces with the Los Angeles Theater Center for the premiere of Luis Valdez’ comedy, “I Don’t Have To Show You No Stinking Badges”. The production received critical acclaim and enjoyed a successful six-month run.

In 1987, Valdez wrote and directed “La Bamba”, the Ritchie Valens story, for Columbia Pictures. That same year, he adapted his critically acclaimed play, “Corridos: Tales of Passion and Revolution” for PBS Television in association with El Teatro Campesino. It won the coveted and prestigious George Peabody Award.

In 1991, El Teatro Campesino produced its first feature-length film, “La Pastorela: A Shepherd’s Tale” written and directed by Luis Valdez for PBS Great Performances Series. It aired internationally on the United Kingdom’s Channel Four and on Spain’s TVE Television Espanola and quickly became a staple of Holiday programming on the Telemundo Network.

In 1996, a whole new generation of young Teatro artists began experimenting with live and electronic theater, producing revisionist versions of classics such as Antonin Artaud’s “The Cenci”, Alfred Jarry’s “Ubu Roi,” Bertolt Brecht’s “The Measures Taken” and the entire cannon of Luis Valdez, beginning with his first play “The Shrunken Head of Pancho Villa.”

In 2000, Luis Valdez and El Teatro Campesino began an extended association with the San Diego Repertory Theater to develop and create new works for a growing multicultural audience. Over a five year period, Luis Valdez wrote and directed two new world premieres, “Mummified Deer” (2000) and “Earthquake Sun” (2004), and collaborated with his son Kinan on a third production, “Corridos REMIX” (2005).

In 2002-2003, El Teatro Campesino produced a 25th Anniversary production of Luis Valdez’ hit play, “Zoot Suit”. The wildly successful revival ran for nearly a year, and launched on a U.S. Southwestern Tour in 2004, becoming the genesis for an emerging new generation.

By 2006, El Teatro Campesino had returned to its roots as an ensemble theater company committed to generating social change through the arts. A new enthusiastic generation, under the direction of Kinan Valdez, began training in the classic ETC style and creating new works to explore the changing multicultural face of the Americas.

As ETC charges forward toward our 6oth year as a company, we recognize our current reality as a reflection of the injustices, especially in the United States, against black, Indigenous and people of color. The reality of living through a devastating pandemic, the ongoing struggle for equality for black and brown lives, the economic devastation for marginalized communities, and the current administration’s explicit actions to harm our communities is even more reason for us to charge forward into an uncertain future, with the knowledge that our history informs us, and our passion and commitment to artistic excellence and the pursuit for a socially just and equal society impels us to share our message with the world.

From the migrant labor fields to Broadway, Luis Valdez remains true to his original vision… performance that addresses the Chicano experience in America in a context meaningful to all Americans. Valdez’s credits include, founder & artistic director of the internationally renowned El Teatro Campesino, council member of the National Endowment of the Arts, and founding member of the California Arts Council.

A Letter from Luis Valdez