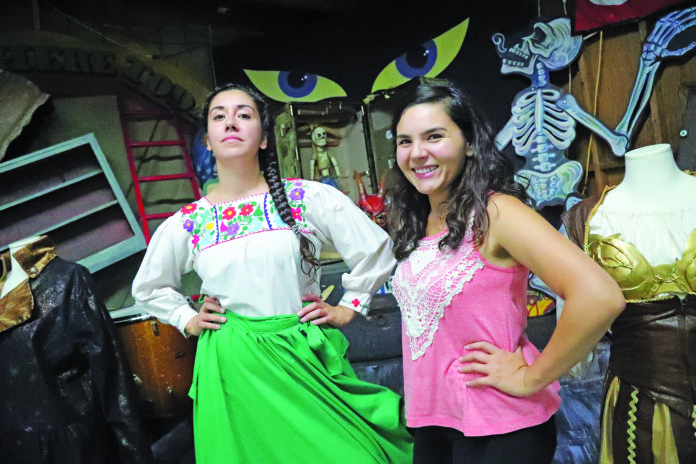 “It is designed to be an immersive experience as the action takes place throughout the playhouse,” said Christy Sandoval, co-director of the retrospective that spans the influential group’s more than fifty year history.

During the performance, audiences travel from room to room, walls of which are covered with El Teatro Campesino memorabilia and props that theatre-goers will remember from previous productions.

The play takes place in a dystopian future and tells the history of the Chicano theater company through characters and motifs from classic Teatro productions.

In one scene, the audience gets to experience the struggle of the company’s founder and National Medal of Arts recipient, Luis Valdez, as he writes his seminal play, Zoot Suit.

The frustration to convey a people and a narrative that has to fight for relevance in a volatile society is powerful, and starkly relevant in these divisive political times.

“Looking at all these pieces, the short vignettes and puppet shows in the 1970s, every scene and root cause is about struggling against the social and political structure,” said Sandoval. “It could be disheartening, like we are going backwards, and that 50 years later, we are still going through the same thing.”

But, Sandoval said, El Teatro Campesino was always a beacon of hope, no matter how grim the circumstances.

“The people, the pieces, the songs, they become a symbol of something much larger, of hope, of people coming together,” she said.

Emily Morales, who like Sandoval both perform in the play as well as direct, said she hopes people come out the production feeling empowered, inspired and capable.

“There is so much craziness going on in the world it is easy to lose hope and be overwhelmed,” she said. “We are bringing back the history and past experiences of our ancestors to show how they came through it. This isn’t the first time we have had to go through struggles and each time we have overcome and are stronger as a people.”