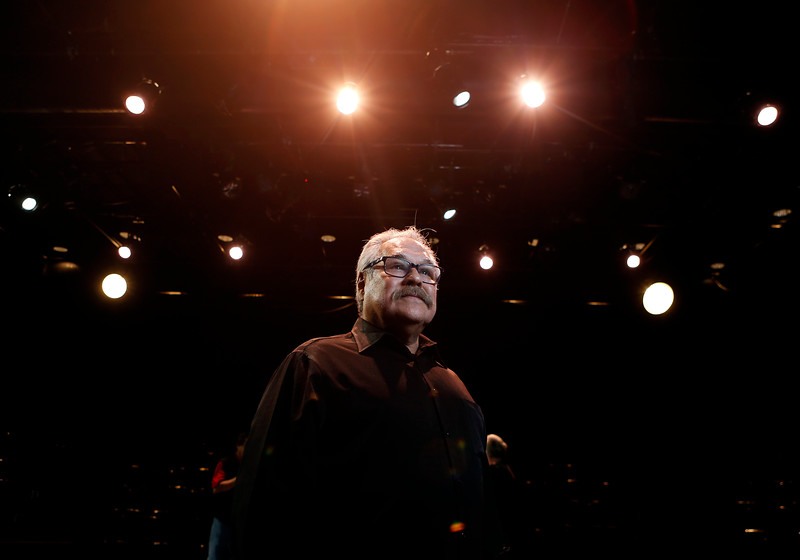 Staring down the barrel of a shotgun during the turbulent days of the 1965 Delano Grape Strike, Luis Valdez’s storied career in theater underwent trial by fire.

An enraged farmer had put a gun to Valdez’s head and ordered him to stand down from rallying the farmworkers alongside Cesar Chavez. The San Jose State alum and a small cast had been staging rabble-rousing political theater from the back of a flatbed truck, a series of skits urging migrant farm workers to join the picket lines. Thus began the tumultuous birth of El Teatro Campesino, the legendary Farmworkers Theater. And it nearly cost Valdez his life.

“It was terrifying. I thought it could be the end,” says Valdez, 75, getting choked up at the memory. “I had to ask myself. ‘Was it worth it? Was the Teatro worth my life?’ And the answer was ‘yes.’ ”

Now, 50 years later, Valdez considers the experience a badge of courage. The farmer backed down, and the Teatro carried on. Indeed, the famed San Juan Bautista-based troupe is now celebrating its 50th anniversary of chronicling the Latino experience in California, advocating social change on stage. While the Teatro began by focusing solely on the plight of the farmworker, the company’s repertoire expanded to exploring issues of race and class at large. The landmark anniversary season was launched with a Dia de los Muertos celebration over the weekend and will see its first production, a revival of Valdez’ “Valley of the Heart,” early next year at San Jose Stage Company.

“Luiz Valdez changed the face of American theater,” says Carey Perloff, head of San Francisco’s American Conservatory Theater, “not only because he gave voice to an entire population that had been unrepresented on our stages but because his astonishing sense of theatricality and play found a form in which to illuminate the stories of the farmworkers in a completely original and vividly theatrical way.”

Valdez has made history so often The New York Times has hailed him as a hero of Latino theater. He became the first Chicano playwright produced on Broadway with “Zoot Suit,” which examined the infamous Sleepy Lagoon murder case of 1940s Los Angeles. He directed the highest-grossing Latino-themed movie of its time, “La Bamba,” a 1987 biopic about the life of singer Ritchie Valens. But his most cherished accomplishment remains launching the Teatro Campesino, and with it, the Chicano theater movement.

“I was full of piss and vinegar in those days. I was eager to prove my bravery,” says Valdez. “Now people call me a legend. I don’t know about that. I know that I came first and I did what had to be done. If that makes me a legendary figure, so be it.”

The son of migrant farmworkers who toiled in the fields near San Jose in the 1940s, Valdez won a scholarship to San Jose State in the ’60s, where he staged his first full-length play, “The Shrunken Head of Pancho Villa,” before joining the leftists at the San Francisco Mime Troupe. SJSU recently staged a revival of “Zoot Suit” as well as an exhibit on the history of the Teatro. Among the subjects the company has taken on over the years are the Vietnam War, Japanese internment and the need to illuminate Latino history and roots. The plight of the downtrodden is usually at the core of the drama.

“His work, part agitprop theater, part universal mythology and always of the heart, has always spoken to me,” says Amy Glazer, professor of drama at SJSU. “The tales he spins, the characters he has given attention to, all of it is human and universal.”

Valdez may have become a theatrical icon but he remains grounded by such memories as the time security guards at the studio where he shot “La Bamba” pointed him to the service entrance because they assumed he was making a delivery.

“They had never seen a Latino director before,” he recalls.

“Luis is on a mission to address current issues, which is the true purpose of theater,” says Randall King, head of San Jose Stage. “He has built cultural bridges of understanding and acceptance for 50 years. He is a man of great personal and artistic integrity who through his sense of diplomacy can convey a message while fighting the good fight. I am honored to call him mi amigo.”

At a time in life when some would rest on their laurels, Valdez is still pushing himself. He recently staged a dramatization of the Mayan creation myth “Popol Vuh” for Los Angeles’ Center Theatre Group and acted in a revival of Clifford Odet’s “Waiting for Lefty” at Joe’s Pub in New York. And he’s doing final revisions on “Valley of the Heart,” a tale of Silicon Valley’s bygone farms for its run at San Jose Stage next year.

Valdez often credits a kindly schoolteacher with introducing him to the power of theater by casting him in the school play when he was 6. When his family got evicted from its labor camp he left the school, but that teacher had set him on the path that led him to join forces with Chavez, befriend the likes of Robert Kennedy and eventually emerge as a nationally recognized cultural trailblazer in the arts and politics.

He sees the scheduling of “Heart” — which captures a community torn apart by Japanese internment and the hardships of migrant life — at San Jose Stage as a homecoming of sorts.

“I am a hometown boy,” he says. “I remember a time before Silicon Valley. I remember the ‘Valley of the Heart’s Delight.’ Bringing the play to San Jose is important to me because it means coming full-circle.”